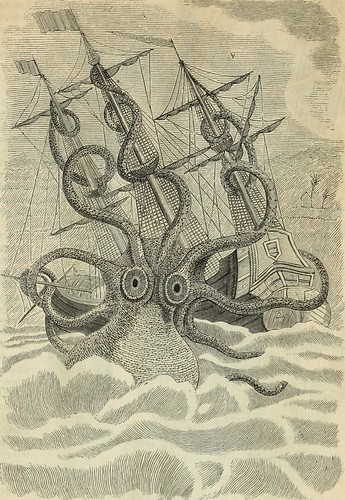 Text Appearing Before Image:
the act ofswimming, the head so far elevated and thrown foi*ward by the curveof the neck as to enable us to see the waterunder and beyond it. The creature rapidlypassed, leaving a regular wake, from the com-mencement of which, to the forepart, which wasout of water, we judged its length to be about80 feet; and this is within rather than be-yond the mark. We were, of course, all takenaback at the sight, and with staring eyes and inspeechless wonder stood gazing at it for full halfa minute : there could be no mistake, no delu-sion, and we were all perfectly satisfied that wehad been favored with a view of the true andveritable sea-serpent, which had been generallyconsidered to have existed only in the brain ofsome Yankee skipper, and treated as a tale notmuch entitled to belief. Dowlings exclamationis worthy of record, Well, Ive sailed in all partsof the world, and have seen rum sights, too, inmy time, but this is the queerest thing I eversee!—and surely Jack Dowling was right. It is

Text Appearing After Image:
FAC-8IMILE OF THE OOMMEMOEATIVE PAINTING IN THE CHUBCH OF ST. MALOB, FEANOE. most difficult to give correctly the dimensions ofany object in the water. The head of the creat-ure was set down at about six feet in length,and that portion of the neck which we saw atthe same; the extreme length, as before stated,at between 80 and 100 feet. The neck in thick-ness equaled the bole of a moderate sized tree.The head and neck of a dark brown or nearlyblack color, streaked with white in irregularstreaks. I do not recollect seeing any part ofthe body. Sir A. de Capell Brooke, who traveled in Nor-way in the early part of the present century, citesthe evidence of a great many trust-worthy per-sons who had, at different times and on differentparts of the coast, seen the animal; and in 1845,at the request of an English society, the Rev. P.W. Deinboll, a Norwegian minister, took pains toreinvestigate the question, and furnished the evi-dence of a large number of persons, then living,who had seen, sho