You are here: Home / Images / Extreme Sailing photo: Image from page 216 of “The American encyclopædia of commerce, manufactures, commercial law, and finance” (1886)

Image from page 216 of “The American encyclopædia of commerce, manufactures, commercial law, and finance” (1886) 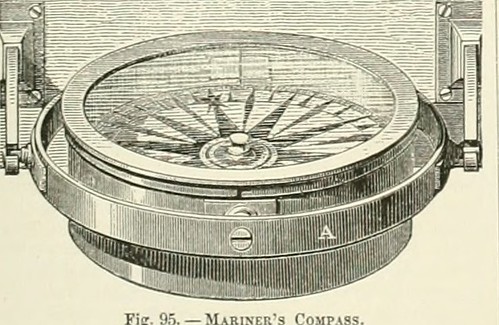 Image from page 216 of “The American encyclopædia of commerce, manufactures, commercial law, and finance” (1886) by Internet Archive Book Images

Text Appearing After Image:
Fig. 96 —AziMDTU Compass riiiimhs like the mariners C, and has sights toallow the angles to be taken more accurately-The sight-plates ascend perpendicularly, and theirslits are bisected by a perpendicular thread or w ire,serving as sights. The cause of the variation ofthe conipa.ss has hitherto eluded the researchesof philosophers, taptam Parry discovered thatwhen he had passed to the north of a certain spotwestward of Hudsons Strait, the needle, which hadbeen previously varying to an extreme degree.abso-lutely went half round the compass, and this contin-ued to be the case until he had sailed considerablyfarther north. Whetherthis peculiar attraction lindany reference to the real magnetic pole, further ob-servations will perhaps determine. — The deviationof the compass is a local error, occasioned by theattracticm of iron on board ship. It has been thecause of numerous shipwrecks before the inven-tion of the ingenious method of discovering itsamount. The </// of the needle is