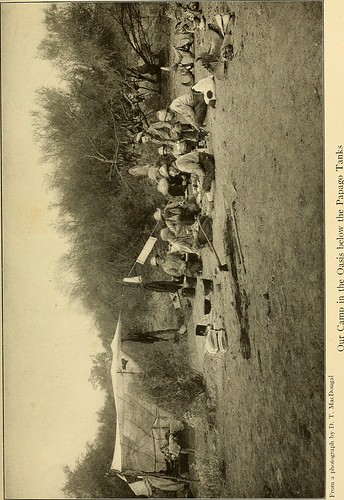 Text Appearing Before Image:
Lava Cones—The Dead Ramand Its Surroundings—Mr. Phillips tells the Story of the RainbowRams. The fifteenth of November was one of the great daysof the trip; but for once my luck abandoned me, and in thethrilling events I was not among those present. Three hunting parties went out for mountain sheep.Mr. Milton went north-east, Mr. Phillips, Mr. Sykes andCharlie Foster went north, while Dr. MacDougal and Iwent back to try out the granite mountains west of thesouthern end of the Pass—beside which we had campedand found fresh sheep signs. Like the luckless whaler of New Bedford, the Botanistand I got no sheep, but we had a mighty fine sail. Wecircled around the big crater, close under its rim, but foundno sheep within. We combed all those mountain sides,as with a fine-toothed comb. We climbed high up intothe heart of the southern group of mountains, where bygood rights there should have been a dozen big rams, butfound no sheep. At noon we unsaddled at the extreme western foot of i86

Text Appearing After Image:
EXTINCT VOLCANOES AND SHEEP 187 the range in the edge of the sand-hills, and while ourhorses restfully cropped the galleta grass we studied thebotany of the sands. Lying low on a dune, we saw pre-cisely how the light, dry sand steadily and persistentlytravels eastward, close along the surface of the fixed de-posit, a thin sheet of it rolling forward up and down theundulations until somewhere it reaches an insurmountablebarrier and stops. We circumnavigated that entire group of mountains,and with our glasses searched every side and summit,confident that we would strike several bands of big-horn;but none were struck. On the Galleta Meadow there weremany jack-rabbits, but they were as safe from us as ifthey had been in a zoo. Our long, circular ride broughtus back to the abandoned wagons at sunset, and we hadto pick our way campward in the dark; but the youngmoon was helpful, and by going slowly we successfullyfollowed the trail. On reaching camp we found that Mr. Milton had re-turned, s

Previous: Cool Extreme Sailing image – Image from page 153 of “Emblems, divine and moral : The school of the heart; and Hieroglyphics of the life of man” (1866)
Next: Sailing Image – DSC_2789