You are here: Home / Images / Sailing Image – Image from page 94 of “The Saint Lawrence basin and its border-lands; being the story of their discovery, exploration and occupation” (1900)

Image from page 94 of “The Saint Lawrence basin and its border-lands; being the story of their discovery, exploration and occupation” (1900) 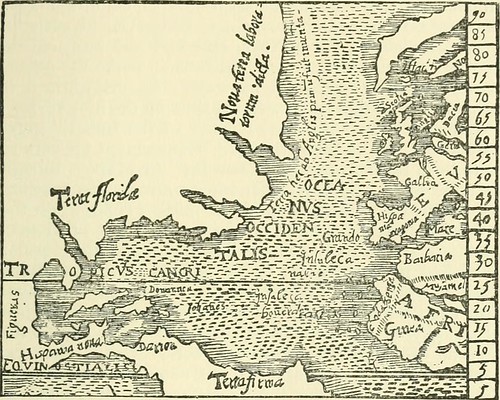 Image from page 94 of “The Saint Lawrence basin and its border-lands; being the story of their discovery, exploration and occupation” (1900) by Internet Archive Book Images

Text Appearing Before Image:
l daylight; yet sawe he land in thattract free from ise. Thus, seeing such heapes of ise be-fore hym, he was enforced to turne his sayles and folowethe west, so coastynge styll by the shore, that he wasthereby brought so farre into the south by reason of theland bending so nnich southwarde that it was almostequall in latitude with the sea called Fretum llercula-naum. This means, in short, that he sailed first to thecoast of Labrador, where he pushed his way northamong the icebergs, as far as he could go, and thenhe turned south and coasted along shore nearly as faras the latitude of the Strait of Gibraltar. All of this CABOTS SECOND VOYAGE 41 is in accord with the physical geography of thecoast. Robert Thorne, an EngHsh merchant, resid-ing in Seville, sent privately to King Henry VIII.,in 1527, a rough sketch of a map in order toshow the King his rightful claim, by prior discovery,to a large part of the American coast. Robert Thomesfather had been upon an expedition to that coast. The

Text Appearing After Image:
Fig. 5. Robert Thomes Map, A. D. 1527 family was of Bristol, and Robert Thorne himself wasmuch concerned with shipping. At Seville he was in aposition to know Sebastian Cabot, and Seville was thenthe centre of western discovery. His map has, for-tunately, been preserved in Hakluyts Divers Voyages,and the inscription on it, Terra hoc ab Anglis prima fuitinventa, marks the coast from the extreme north ofLabrador to a latitude as far south as Lisbon; thus con-firming Peter Martyrs report of Sebastian Cabots state- 42 THE ST. LAWRENCE BASIN mont. Another proof tliat this voyaq^e was the second ofthe Cabot vova<^es is tlie fact that the fleet was victualledfor a year, wliereas. the contemporary evidence proved,beyond a doubt, that tlie little vessel of the first voyap:ehad to return for want of jirovisions, and was alxsent onlyninety-three days. Moreover, tliere is no mention madeof ice in tiie accounts of the first voyage, and in allaccounts of the second ice and icebergs are stronglye