A Extreme Sailing tagged image from photographer – denisbin as published on Flickr. 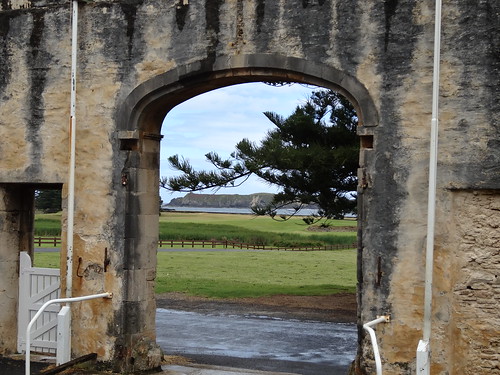 Brief History of Norfolk as a Penal Settlement.
As noted previously Norfolk was settled to provide flax fibre rope, flax sails and tree masts from Norfolk Island pine trees and also because it was uninhabited. It was also an island paradise with rich volcanic soils. Its only major drawback was its isolation and its lack of a good harbour. Its history falls into several phases.
Phase One- 1788-1814. This phase was run along the same lines as the settlement of Sydney. Both men and women convicts were quartered here. The women were to work making flax rope and sails and the men were to do the building, road making, land clearing, agriculture and stone masonry work. Some free settlers came too. The settlement was centred on Kingston (then called Sydney) and nearby Arthur’s Vale (watermill valley.) By 1806 the population had reached over 1,000 people. Then for financial reasons- the cost of sending supply ships from Sydney to Norfolk was too great- the evacuation of the island was ordered. Convicts and other settlers were moved to Van Diemen’s Land- hence the settlements there of New Norfolk and Norfolk Plains (later Longford.)
Phase Two- 1825-1855. This time the island was run as a total penitentiary for the worse offenders. There would be no escape from Norfolk Island. Conditions were harsh, severe and degrading. It was a place of extreme punishment. The worst commandant was Captain Turton. During the period 1840-44 conditions were slightly better. Free settlers were not encouraged to settle during this second phase but a few of the best behaved convicts were allowed to work small farms across the island. Massive government expenditure on the penitentiary meant that fine sandstone Georgian buildings were erected and like Port Arthur in Tasmania many of them still remain. A large prison was built in the 1840s, and the prison required large military barracks, large stores and Commissariat stores, officer headquarters, a large hospital etc and good quality homes for the prison and military officers on the island. Kingston remained the administration and shipping centre of the island.
Phase Three – 1856-. In the third phase some of the original stone buildings were dismantled or left to go to ruins. Some were burnt down or the stone re-used for other structures. But the major feature of this period was the introduction of 194 Pitcairn Islanders in 1856. Norfolk remained isolated and largely forgotten. At one stage the Governor of NSW (the British Crown representative in charge of the island) ordered that the Pitcairn Islanders could no longer reside in the former penal settlement buildings in Kingston. This was in 1908 just before the Commonwealth government took charge. The resentment of this change led to fires and some beautiful buildings being destroyed. In 1893 Norfolk got a telegraph office and an underwater cable link to the world via Canada. Soon it had a cable link to New Zealand and a cable station opened at Anson Bay in 1902. Once it became a territory of the new Australian federal government conditions improved a little. Shipping came irregularly but during World War Two the Australian government built an airstrip for defence reasons. Flights continued after the War and now the main linkage between Norfolk and Australia is by air. The federal government has also put more money into other facilities on the island including the Botanic Gardens, and all the restoration work at Kingston etc.
Norfolk Island – an introduction.
By lunch time we will be settled into our accommodation on Norfolk Island. Norfolk Island is just five by eight kilometres and it was first discovered in 1774 by Captain James Cook on his second South Pacific voyage of exploration. Today the island is a territory of Australia, part of the Commonwealth but with a large degree of independence and self government. It is one of Australia’s eleven territories (Northern Territory; ACT; Jervis Bay; Christmas Island; Cocos Islands; Ashmore Islands; Coral Sea Islands; Antarctic Territories; Heard Island and Indian Ocean Islands.) Norfolk’s residents are not represented in the Australian parliament. It has its own stamps, flag governing body etc. The census of August 2011 recorded a population of 2,302 people. It has a constant influx of tourists as well with the island receiving about 12,000 visitors a year mainly from Australia.

The main population centres are in the middle of the island at Burnt Pine and Middlegate. The old convict settlement is on the coast at Kingston. The highest point is Mt Bates at 319 metres or 1,045 feet. Nearby by is Mt Pitt at just over 1,000 feet high and it is an old volcanic cone indicating the origins of Norfolk Island. Cook named it after the British Prime Minister William Pitt, Earl of Chatham and PM during the 1750s and again 1766-68. Norfolk Island is one of a series of volcanic islands on the top of the Lord Howe seamount or ridge which stretches from New Zealand to New Caledonia. The volcanic islands that emerge from the sea are New Zealand, Norfolk, Lord Howe and New Caledonia extending along a zone more than 1,600 kms in length. Near Norfolk the submarine trench is around 33,000 feet deep. Norfolk Island territory has two nearby uninhabited islands named Phillip and Nepean Islands and both are visible from Kingston. Approximately 10% of the island is a National Park centred round Mt Pitt and Mt Bates. There are 178 species of native plants on the island and 40 of these are unique to Norfolk. Norfolk Island Pine (Araucaria heterophylla) is still abundant. It can reach a height of over 150 feet. It constitutes the emblem on the Norfolk Island flag. The other endemic tree, now widely grown as an ornamental in Australia is the Norfolk Island Hibiscus (Lagunaria patersonii). The island also grows the Norfolk Island palm, many ferns, and a native passionfruit. The island has no mammals or amphibians, and only a couple of reptiles – a skink and a gecko. The coral formations around the island teem with marine life and are home to many tropical fish, eels, octopus, starfish etc. The island provides a good habitat for many local and migratory birds including the wedge-tailed shearwater, (Puffinus pacificus) whose moaning calls echo around the island at night!

Norfolk Island was the second settlement of the Australian region following the arrival of the British and their convicts at Sydney Cove. Just six weeks after arrival at Sydney Cove in 1788 some 23 free settlers, 15 convicts, and commandant Lieutenant Phillip Parker King landed on Norfolk. Several hundred more convicts and settlers were sent from Sydney to Norfolk in 1790. It was 14 years later that the third Australian settlement was made in Van Diemen’s Land (1804) at Hobart. Norfolk started out as part of NSW and later became part of Van Diemen’s Land. But after the closure of the convict settlement by the British government in 1855 on Norfolk they set the island aside for the people from Pitcairn Island and many Norfolk residents still dispute Australia’s control of Norfolk Island as an Australian territory. Britain has never regarded Norfolk Island as a separate British colony.

The old school text book explanation for the settlement of Norfolk Island is largely true. The British government wanted to access the New Zealand flax plants growing on the island ( Phormium tenax.) The NZ flax was not native but archaeologists believe Polynesians, probably Maoris, introduced flax to Norfolk Island about 600 to 800 years ago. (They introduced the common rat at the same time!) As a naval empire Britain needed supplies of flax rope and flax sails for its sailing fleets. At the time of the settlement of Norfolk Island (1788) Britain obtained its wooden masts from Nova Scotia and its hemp and flax from Russia. Britain wanted new supplies of both masts and rope and sails as they feared the relationship with Russia would be terminated. Because of these concerns Norfolk Island was settled early in 1788 and many female convicts were sent to Norfolk Island so that they could weave and sew the flax and rope. When the second lot of convicts went to Norfolk in 1790 there were 150 females aboard the ship but only 30 male convicts. But by the early 1800s the authorities realised that the convict women would not be able to produce much rope or cloth. Only one ship ever left Norfolk with locally produced sails. Additionally, the tall, straight Norfolk Island pines proved unsuitable for ship masts as the wood was too soft and lacked strength. Thus the commercial justifications for settling Norfolk as a penal settlement diminished. But the origins of Norfolk are fascinating. One of the 1790 ships taking convicts to Norfolk, the former flagship of the First Fleet to Botany Bay was shipwrecked near Kingston whilst unloading supplies. Hundreds of artifacts have been retrieved from the wreck of the Sirius, including three anchors and two carronades which are displayed in the Norfolk Island Museum. The loss of the Sirius left Sydney settlement with just one supply ship normally used to obtain flour from Cape Town.